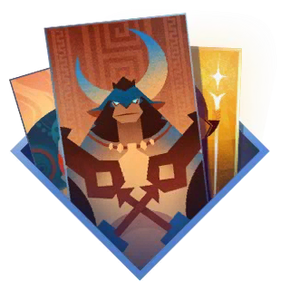 The Fortune Cards are a collectible within Gigantic as well as a key feature of the game. Each card has a task which, upon its completion, will award the player with Prestige

, as well as reveal a part of the lore.

Cards are divided by category – a card may be based upon the world – Major Arcana, or upon a Hero – Minor Arcana. Cards further are dived by sets of 3 rarity types, which reward player with a designated amount of Rubies with completion:

Overall amount of all available in the game cards, counting all rarities, is 549. Player can have a hand of maximum 7 cards to complete in a time. To get a new card player should make a draw. Draws can be obtained through a couple of different means:

Below are presented all Fortune Cards, both featured in the game and unreleased.