This article is about a creature; for developer studio see: Motiga 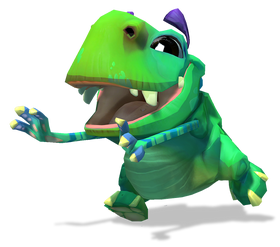 Motiga is a special family of creatures, which is not available for summon on Power Circles by heroes and spawn only in Practice Arena, playing a role of smarter target dummies.

Motiga is a little dragon (adult Motiga is smaller than adult Drake), thus its look is more akin to cartoon dinosaur: it has disproportionately big head with big bright eyes and eyebrows, long thin arms for grabbing, short sturdy legs for walking and skin of very bright colors (adults are green, while youngsters are purple, yellow or pink).

On Practice Arena there is only one adult Motiga near friendly Power Circle. South side of the map is full of baby Motigas. The only attack all of them capable of is a fire breath, they start attacking player once he steps to their territories.

Meanwhile, on North side of the map there are special pink baby Motigas who apply various negative status effects, which are designated on titles above their health bars. They attack only if player is very close to them.